5 Reasons Why Gameday At Kinnick Stadium Is So Special

The pomp and pageantry of college football is one of the reasons it carries a special place in the hearts of fans across the nation. In each college town, the local traditions make gameday an experience unique to that school's history.

Iowa is no different, and Iowa City is a special place to watch football in autumn. The Black and Gold runs deep for every Hawkeye fan. Here are five reasons that make gameday at Kinnick Stadium so special on a football Saturday -

The University of Iowa’s Stead Family Children’s Hospital overlooks Kinnick Stadium and has a viewing area where patients and their families can watch Hawkeye football games. During the 2017 season, fans started to turn away from the football fieled at the end of the first quarter and wave to the children in the hospital. It has grown so popular that the Iowa team and coaches, as well as the opposing team and coaches, are now turning and waving to the children during the game.

During Hayden Fry’s time as head coach, he introduced many traditions, including “The Swarm.” Led by Herky Hawkeye, the team jogs slowly onto the field through the tunnel. With the captains in front, the entire team locks hands as a symbol of strength, unity, and support for each other. Today, the team is accompanied by AC/DC’s “Back in Black” blaring through the sound system.

3.  In Heaven, There Is No Beer/Hawkeye Victory Polka

After every Hawkeye win, the marching band delights fans with the playing of this song, which features the lyrics, "In Heaven, there is no beer... That’s why we drink it here . . . And when we're gone from here . . . Our friends

Led by the cheerleaders waving big flags with each letter, each of the four sections of the stadium shout a letter, repeatedly spelling IOWA while forming the letters with their arms.

“I thank God I was born on the gridirons of the middle west and not on the battlefields of Europe. I can say confidently and positively that football players in this country would rather fight for the Heisman award than the Croix de Guerre.”

Kinnick was later killed during a training flight crash off the cost of Venezuela in 1943 at the age of 24. The football stadium was named in his honor in 1972, and today, before every home game, a video of Nile Kinnick’s Heisman Trophy speech is played on the scoreboard. 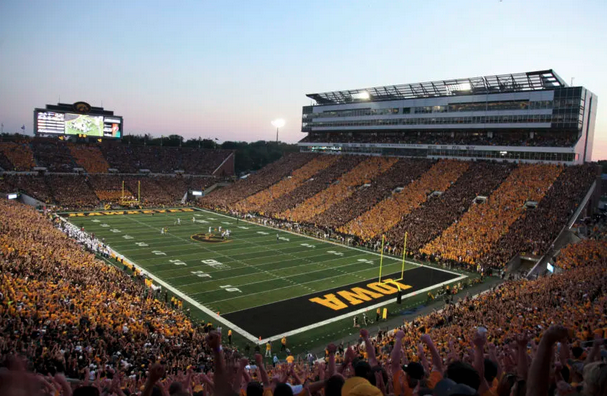