The Father Of Our Country Loved Ice!

George Washington was many things . . .

During Washington's time, the coldest days at Mount Vernon were used to harvest an unusual crop - ice.

Washington's diaries and letters are filled with references to ice and the special structure he built to safeguard this "crop" as temperatures began to soar in Virginia. The offical Mount Vernon website describes Washington's infatuation with making ice like this: 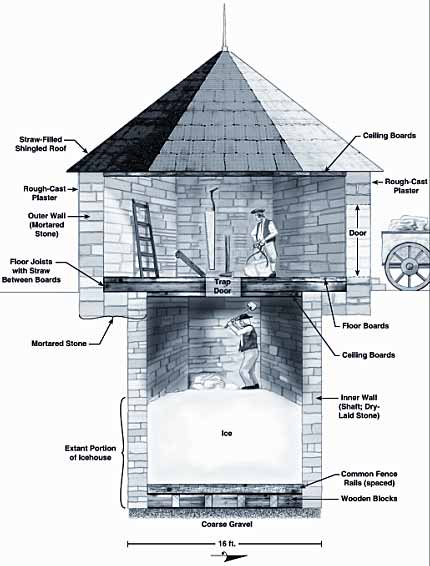 "Washington's first effort at an ice house involved the collection of snow, which failed miserably, as it did not last to the beginning of summer. So he wrote to friends asking for their advice on the construction of a first-class ice house. Washington's design called for a dry well dug into the hillside, encased with an outer wall constructed of wood planks. Between the well and the wall, Washington installed a three-to-four inch layer of straw, which served as insulation and maintained the ice from melting. Another method of keeping the ice from melting was covering it in sawdust. Washington had the top of the ice house arched so dirt and sod could provide additional insulation. Inside, a ten-foot-long ladder enabled workers to retrieve ice from the well."